Those of you who follow this blog will know that I somewhat enjoy Mozart’s Don Giovanni. I’ve been to several live performances, mainly within the UK. Last night, we watched another live performance. But rather than battling through crowds at the Royal Opera House (and it looked like a packed hall), we went to a local cinema where the opera was being broadcast on the big screen. Apparently the opera was being broadcast to over a thousand cinemas worldwide. The idea of increased accessibility really appeals to me, as well as the convenience and lower cost to attend. 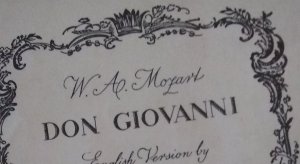 Cinema vs on site

It was certainly more comfortable to have a reclining seat for the three-hour opera (plus 30 minute interval) rather than a standard-sized chair. The camera feed focussed more on individual performers than the whole set, leaving the cinema audience no choice as to who/what to look at. I had initially been dubious about this approach, but the orchestra and conductor close ups were an unusual treat.

Unfortunately, a technical glitch at our cinema meant that Act 1 was cut off several minutes before it actually finished, which was extremely frustrating (spoilers: so we missed an abduction, a rescue, a framing and an escape). Additionally, the audio skipped intermittently—a bit like a scratched record—and the singing didn’t fill the room in the same way as a live performance might. So in a sense, this was a more visual performance than usual. Which leads us nicely on to the set.

The set was quite amazing. It was structured over two floors with multiple doors and also rotated. I thought it worked very well to have different characters in different locations, some oblivious to others’ presence: others, not so oblivious.

In addition to the maze-like set, there was video projected on to the background and the performers which gave effects that I don’t think could have been achieved otherwise. For example, names of women were “written” on the background at various points, reflecting Leporello’s list in “Madamina.” Blood trickling down the walls was also used to good effect.

In this production, Don Giovanni came across as an irresistable sexual predator, or maybe simply a babe magnet rather than the rapist he’s often portrayed as. There were plenty of lustful clinches which appeared to be consensual. I’m not really sure how I feel about that, especially as I wasn’t sure at what stage Donna Anna identified him as her father’s murderer vs her illicit (almost?) lover. Of course, attitudes towards sex and social class have changed over time. Donna Anna’s attraction towards him did give an interesting nuance to her relationship with her fiancé, Don Ottavio. I always see Don Ottavio as a stuffy pompous creep who makes me want to kick him in the shins, so I rather sympathise with Donna Anna who’s stuck with him. I hasten to say, my opinion of the guy has absolutely nothing to do with last night’s performance—tenor Daniel Behle was in excellent form.

As mentioned above, I missed the end of Act 1. The finale in Act 2 left me somewhat confused—Don Giovanni appears to be left isolated in a monochrome world, possibly after having a heart attack (going by repeated chest clutching) and possibly also having gone mad. After being thoroughly impressed by the visual effects in earlier scenes, I had rather hoped for more of an ending bang.

As expected, the singing was very good although from my perspective limited by a combination of the transmission and cinema audio systems. I felt that the lip sync was just a tiny bit off. Leporello seemed to have a lot of fun mugging away and making snarky comments, and there was more humour from the other characters too. I’ve probably said this before in a review of some previous production, but I like that we seem to be moving away from Don Giovanni as a brutal thug.

In summary, a combination of the visually striking set and watching in a cinema rather than live made this more of a treat for the eyes than for the ears.

Here’s more information about the production from the Royal Opera House.

I’ve also rounded up a few reviews of this production, in no particular order:

At time of posting this, there are tickets left for tomorrow’s performance, but you’ll have to move fast.

3 thoughts on “Another Don Giovanni review”