Today we’re interviewing Devon Martek who is the Chief Security Councillor in Ascar. Councillor Martek has decades of experience working in the city. He started off as a city guard. He then became an administrator. Because of a facility with statistics and collating reports, he developed a reputation for spotting patterns.

Here’s a picture of him rather disgruntledly modelling a prototype surveillance gadget. As far as we know, this hasn’t yet gone into general use.

IC: Councillor Martek, thank you for speaking to us today. Can you tell us about your position?

DM: I’m the Chief Security Councillor. Although I’m based in Ascar, I’m responsible for overseeing the security of the entire realm.

IC: What kind of security issues come up?

IC: Are you in charge of the guards?

DM: Not exactly. The convoy and city guards report to the Council via the captains rather than to me. The royal guards are overseen by the royal chief guard. He answers to the monarch.

DM: Although some guard duties logically come under security, certain aspects of their work are wider ranging.

DM: Take the convoy guards. They travel around the settlements, escorting travellers and ensuring essential items and communications are delivered. The convoy represents a sort of umbilical cord with the capital. But it’s not all crime and policing, it’s general safety.

IC: And this encompasses natural hazards?

DM (chuckles): Or even unnatural ones. Such as beast attacks and any cursed mounds that are discovered on convoy routes.

IC: Discovered? Like, they appear in between one convoy trip and the next?

DM: No, not at all. Convoy routes aren’t fixed, and because they meander they may sometimes stumble close to a mound. After that, of course, we map it and direct subsequent convoys to take a detour.

IC: So convoys travel through rough terrain rather than on roads or even established paths?

DM: That’s right. You’ll be wondering why we don’t lay roads, I suppose?

IC: I admit the thought had occurred to me. If I understand right, it takes a week to walk from one settlement to another although the distance as the crow flies is quite short.

DM: Well, that’s partly a security issue and partly resource management. Convoys only travel to a specific settlement every few months, so it’s not worth the investment to lay roads. We discourage civilians from travelling unescorted, because of the danger from beasts. Additionally…

DM (glances round): If a traveller is unfortunate enough to be attacked and cursed by a beast, he or she will display signs of the curse within three days after the attack. So the length of the journey functions as a sort of quarantine, to keep the rural residents safe.

DM: What’s that? Something about the seasons?

IC: Ah, yes. Uh… does the crime rate vary between summer and winter?

DM: Hmm, good question. I suppose there are more opportunistic burglaries in summer when people leave windows open. Is that what you meant?

DM: Though in winter there’s more pilfering from food stalls. Fortunately, we don’t have many homeless folk—charitable boarding houses usually have space—and people tend to turn a blind eye to the odd bit of food disappearing.

DM: In the city square, there’s a campfire set out beside the statue of the Settlers. Queen Eleanor continues the tradition of keeping it lit in cold weather. However, we don’t see many people using it to keep warm.

IC: I guess that’s a favourable sign. Councillor Martek, thank you for your time.

Obligatory statement of responsibility: In accordance with the conditions of our alternate world exploration permit, Intrepid Explorers™ affirm that 1. none of our ICs (Intrepid Correspondents) will challenge citizens’ current state of knowledge or world view and 2. any use of technology more advanced than in the visited world will remain concealed.

A good life, a long life and a happy life

Pick up a freebie 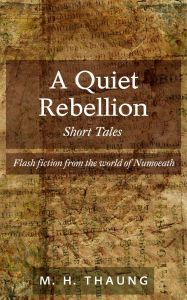 Curious about the world of my novels? Here’s a free story collection for Kindle or in other ebook stores. (OK, it seems that the Kindle version is only intermittently free – please bear with me while I find a solution!)